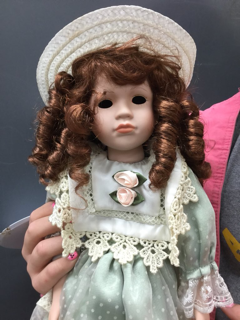 I was absolutely thrilled when months ago my novel, THE DOLL’S EYE, was nominated by the Ontario Library Association for a Silver Birch Award! As part of the program, I was asked by the Forest of Reading to create some fun activities. I thought about my own creepy doll, Baby Crissy…

I have had Baby Crissy since I was about seven years old. Her main feature is her lovely flowing locks. Once silky smooth, they have grown into a tangled and matted mess. The best part of Baby Crissy was that her hair could be made long or short. Now, it’s sort of stuck somewhere in between. I don’t really play much with Crissy these days, so she sits quietly in my closet, waiting to greet unsuspecting visitors with her permanent grin. 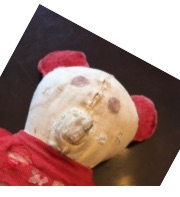 He received “Tommy” the day he was born. Once a fuzzy teddy bear, Tommy has little fur left and no eyes–or any other facial features for that matter. Despite my numerous attempts to get rid of Tommy, he remains in our house, living happily in the basement.

So…I came up with the idea for a creepy doll contest!

Truthfully, I haven’t had a lot of entries yet, but one eager reader has submitted a photo of her creepy doll. Look how she sits there, peacefully, watching…waiting… (cue creepy music…something with bells…) 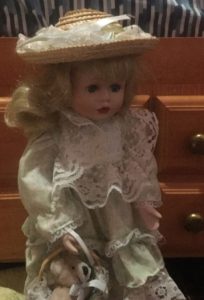 When I inquired as to this lovely doll’s name, I received the following response:

“I was at a Christmas party with my parents and my dad had picked a random present that turned out to be the doll. He didn’t unwrap until we were at home on our front porch so that is when we found out what it was. Dad didn’t want her and mom didn’t want her so I said that I wanted her because she looked cute and the packaging was pink and flowery. Then my dad told me that she would say thank you if I said she was pretty. I put her behind my closet door and left her there. I’ve never heard her talk because I don’t take a chance on talking to her. I just carefully move her once in awhile and hope she doesn’t speak to me!”

So alas, the doll remains nameless. (Oh! Can’t you just imagine a story based on this poor nameless creature?)

Another awesome reader has taken the initiative to DRAW some creepy dolls! I just love these! 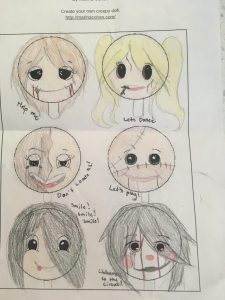 I’m hoping to get a few more entries before the end of April! So, if you’re taking part in the Silver Birch reading program and you have a creepy doll, stuffie, or action figure–send me a photo and I’ll enter you into the contest!

Okay! So another entry came in! This one is super creepy as the young lady looks like her doll, Tia!! (Um–total connection to THE DOLL’S EYE folks!!) 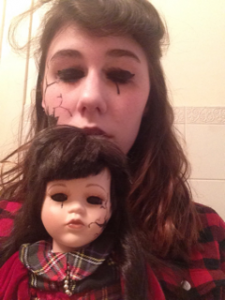 Another photo (though it doesn’t count for the contest) was sent to me by keen librarian Karen! Such awesome support from up North! Apparently, these dolls hang out in the library so be careful if you find one peering over the shelf at you! 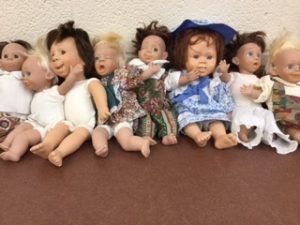 Some last minute entries! May I present a somewhat nasty looking “Morgan”. 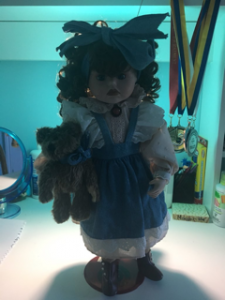 Plus Alice, who appears to be missing not one eye but TWO!! Eeeek!!! 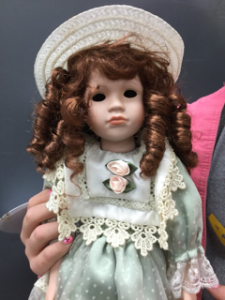 And the winner is….

Okay, I confess, it’s difficult to decide. These dolls are all so creepy in their own way! Scowling Morgan, Eyeless Alice, Twinning Tia…and don’t even get me started on Keen Karen’s Creepy Crew! I adore the hand-drawn dolls as well. But I have to say, the prize went to the nameless doll that just may speak to you if you come across her…

...the road to publication is often riddled with potholes, detours, and all manner of obstacles......